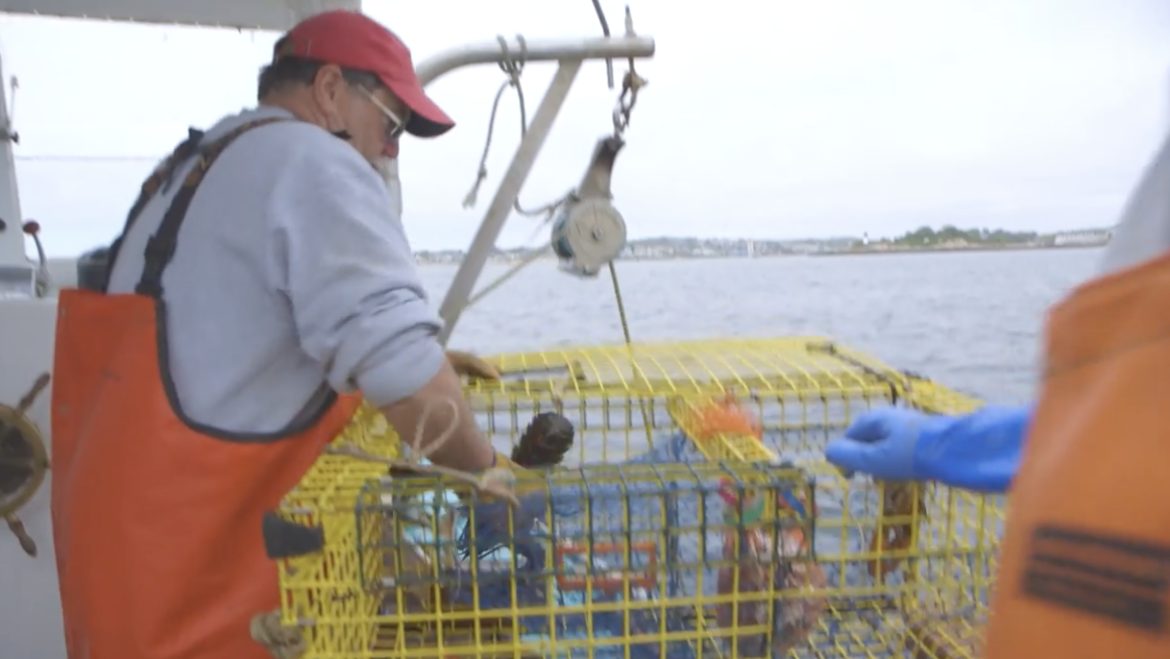 – A poem written by Ken Bowker (11/30/2014). This poem beautifully characterizes the life and sentiment of a modern day Gloucester lobsterman, as is depicted in the Bay State Skye. Thank you Roy Spittle for bringing this poem to my attention.

In the slosh and tumble of waves, around ledges,
at the favored lobster spots close to shore, the white working boat
maneuvers about rocks, gear shift growling,
runs down on pots, the men scooping them up,
hauling traps aboard, pulling the writhing bugs out, checking length
sometimes tossing most of them back in
thinking its time to shift the pots further offshore.
It seems the hold is never quite full,
when they turn the helm to home.

It’s not all work, for there is a time for awe and wonder in going
to and fro, in foggy uncertainty, or clear air
when the horizon is crisp and stark,
or when clouds boil, flowering in blue sky,
or when the black of a coming storm menace,
or in the calm of sunrise, waters flat as can be,
never the same from day to day,
but same never-the-less. You’re on your own out there,
with faith’s wafer and wine certainty and protection
warding off threat of wave and rock
in the heave and thrust of swells
uneven footing, a dangerous winch cable
screaming on its spool.

There is a muscle taut energy
in this small 35 foot lobster boat
heir to the fast Grand Bank fishing schooners,
proud large trawlers, the great hauls.
These rock crawling scavengers
are all that’s left to harvest now, bend the muscles to.
It’s traps now, was nets then, always the haul,
the heft of the prey on the deck
in the heave and rolling wave of the sea.

The big thing to think about
what many of us do not
is who and where we are in this world.
So few know, but those whose working rhythm
is embedded in it, do.

A Saint Joseph medallion dangles from the rear view mirror
of their pickup loaded with traps and pots
and its ‘screw you’ bumper stickers.
But when some ignorant ass**** on autopilot
with cutters on his floaty yacht’s prop
tears through a line of pots all the day’s money’s gone
What’s Saint Joseph to do then
you have to keep asking.

Oh, they’re not paying what they used to, 3 buck a pound,
not worth it sometimes when they’re 10 bucks afterward.
Everyday, passing by the Dog Bar, offloading the stuff,
tired, returning to the slip, tie up, disembark
and, bone hope weary, might take to drink again.

In the coherence of this life,
(the faith and ceremonies, a cardinal’s blessing
once a year doesn’t do much)
no matter how small it seems
faith punctuates the daily chores,
but it’s the rhythm of the lobsterman’s life
out and back again, bait and reap
that sustains as it does for all working men,
the doing of it.